How do you fix a shy bladder? 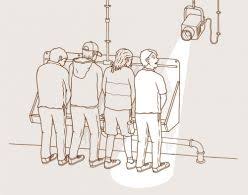 Millions of Americans suffer from an anxiety problem that few know about and even discuss. This social phobia is paruresis, or shy bladder syndrome. At some point, almost everyone has difficulty urinating, most commonly as a result of a medication when recovering from a surgery, or when giving a urine sample at the doctor. But this temporary condition is not paruresis. People who suffer from paruresis almost always have trouble using the bathroom if other people are around, even in their own home. Paruretics experience a consistent pattern of “freezing up” and avoiding public restrooms. The condition often develops from a traumatic event. The triggering event can range from a simple remark (“Will you hurry up and go” spoken to a child going to the bathroom) to chronic bullying.
Over the past few years, I began assessing for shy bladder with all my clients and discovered that many people struggled with it, but didn’t bring it up on their own either because they didn’t realize it could be helped with therapy, or felt too self-conscious to bring it up on. The good news is the treatment for paruresis is simple: Since some event, or series of events, triggered the inability to urinate in public, the method to overcome the disorder is to relearn how to urinate in a safe environment. The best evaluated treatment is referred to as graduated exposure therapy, essentially, doing what you fear in a step-by-step fashion and the exposures occur gradually, often, and for prolonged periods of time. For paruretics, since avoidance of urinating in public restrooms is the phobia, the “do what you fear,” involves gradually and repetively attempting to urinate in the presence of others, in situations ranging from those that are “safe” to more challenging situations.
Here’s an example of one of my patients who agreed to share his story. At the beginning of treatment he said, I am a 31 year old male who has had this problem for as long as I can remember. I can’t urinate if I have even the slightest idea that someone might come into the bathroom. I have severe anxiety about it…, it isn’t rational, but it seems to be the way things are right now.
Here’s a summary of some of the tools we used to help my client conquer his shy bladder:
1. We started with “fluid loading.” This means, drinking a lot of water until he felt like he was about to burst. (This idea of fluid loading goes against one of the main coping strategies that patients use, that is controlling the intake of fluids in order to control the “when” and “where” of needing to urinate – e.g., avoiding drinking fluids before going out to a restaurant).
2. Working with a therapist as a buddy. My role was simple. I would stand at various distances from the patient (whatever his comfort threshold would allow), in various bathroom environments, as he attempted to urinate. The patient would give me directions on where to stand, and we would always discuss the plan beforehand as a team to make it clear and specific; the patient was in charge of all plans.
3. Developing the behavioral plan. The goal was after loading up on fluid, for the client to allow the flow of urine for approximately 3 seconds and then stop the flow of urine. Then zip up, then go back and repeat. The reason for the 3 second limit is to save urine for repeated exposure attempts in the same session. When he was initially unsuccessful (which is normal and part of the process), we had him wait by the stall for 2 minutes; if he was still unable to go, we took a 3 minute break and tried again. If still unsuccessful, we would reduce the intensity of the exposure (e.g., I would stand outside the bathroom, instead of inside).
3. We worked on a range of exposure challenges, and repeated each one until it became easy for him, before moving on to the next one:
*Urinating at home alone, standing up, while imagining people are standing next to him.
*Urinate in a single person public restroom (a single commode with a locked door) with therapist standing outside the restroom.
*Urinate with therapist standing in the bathroom a few feet with patient.
*Urinate with therapist standing behind patient while therapist makes noise or impatient comments (this helps the patient feel more prepared for any rude behavior they might encounter in a public restroom).
Outcome:
After several successful trials in isolated public restrooms with me present, the client graduated to practice on his own. Attempting to urinate with others present at stalls and at other urinals, then a more crowded restroom. My client varied the context which helped build his confidence even further – urinating at the mall, a busy airport, a sporting event, a concert, and the theater.
After 12 weeks of intensive exposure practice, both in session, and between sessions, he sent me the following email, Dear Noah, I had the most incredible experience. Last night a friend and I went out to dinner. We went to a restaurant we have been to at least 100 times before. I had to go to the bathroom even before we got to the restaurant, which used to produce a lot of anxiety for me. However, not this time. The restaurant was very crowded, and I walked into the bathroom and went. When I got back to the table I realized something, that for as long as we have been going to this restaurant I had never even walked into the bathroom!